The Whales of Monterey Bay 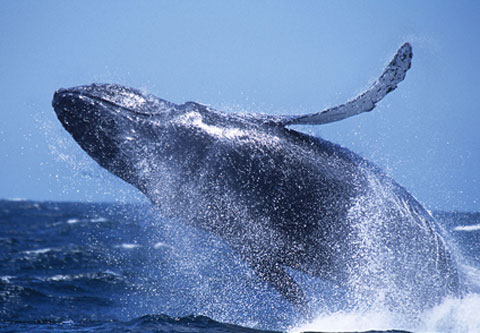 From April through November the Humpback Whale is the most common whale found out of Monterey Bay. The “local” population of several hundred Humpbacks are known to spend the winter months off of the Mexican Coast and then migrate to the central California coast for the feeding season. Monterey Bay is a most abundant food source for these beautiful cetaceans. Humpback Whales are the most animated of all Baleen whales. While Stagnaro’s boats strictly adhere to the (MLPA) Marine Life Protection Act which requires a 100 yard minimum standoff while Monterey whale watching, these curious creatures often come right up to the boat and engage in “people watching”. Humpbacks reach over 50′ in length and are easily identified by their distinctive long pectoral flippers.

This 3-4 hour Monterey whale watching trip focuses on the Humpback Whale. The local herd comes to Monterey Bay and the central coast for seasonal feeding. They feed on anchovies, sardines, and krill (shrimp like crustaceans). There is also an increased change of spotting Blue whales in Summer and Fall. 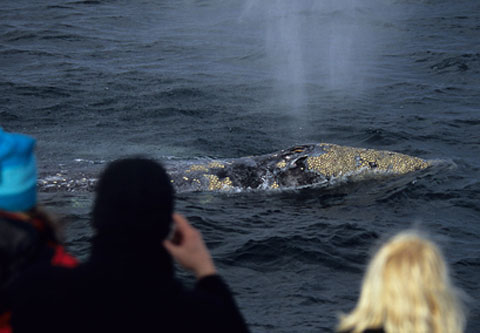 Twice every year over 20,000 Gray Whales pass through our waters off of Santa Cruz. The first time occurs from December through mid February when they are migrating south from the cold arctic waters of the Bering Sea to their winter calving grounds off of the Baja Peninsula. Then north again to their summer feeding grounds in the Bering Sea of Alaska. Northbound whales are usually off of Santa Cruz from mid February through April. This 10,000+ mile roundtrip is one of the longest migrations of any animal known. Peak viewing for southbound whales is usually in mid January. Peak northbound migration is around mid March. The Gray Whale can reach 45′ long. Females are usually larger than males. During their migration they are constantly traveling at 2-4 miles per hour. This can make for ideal viewing. Gray Whales will sound (dive) for 2-5 minutes, sometimes longer. Their northern migration tends to be more social and leisurely. At times they can be spotted mating, breaching and “spyhopping”.

This 3-4 hour trip focuses on the annual migration of the California Gray Whale. Approximately 20,000 whales pass by the Santa Cruz coast south and then north again in a 5-month period. Peak migration usually occurs mid January and mid March. There is also an increased chance of spotting Killer Whales in March, April, and May. 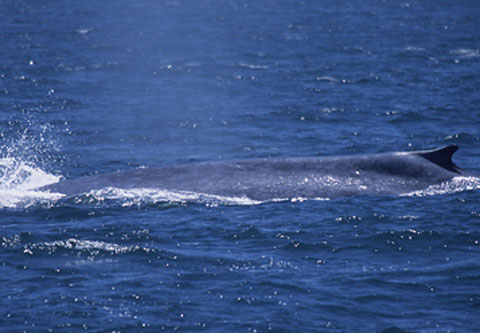 The Blue Whale is the largest animal to ever inhabit the earth including the dinosaurs. In the early days blues reached 125′ in length and 150 tons. Today they rarely exceed 90′. They are found in all oceans but are endangered, approximately 10,000 worldwide. Their distinctive high spout can reach over 25′ and be spotted many miles away. Blue whales can usually be found in the bay in the summer when they feed on krill (small shrimp like crustaceans). 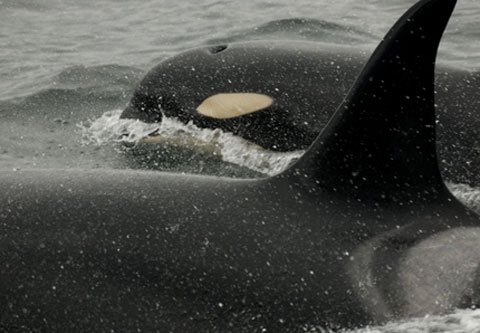 Killer Whales can be seen at any time but are unpredictable. They are however most common during April, May, and June as they predate on northbound migrating Gray Whales, usually mother and newborn calves. Killer Whales are found worldwide. Most Killer Whales seen in Monterey Bay are the “Transient” type somewhat nomadic, feeding on marine mammals. “Resident” Killer Whales feed on salmon and rarely occur here. Resident Killer Whales are indigenous to Alaska and British Columbia. 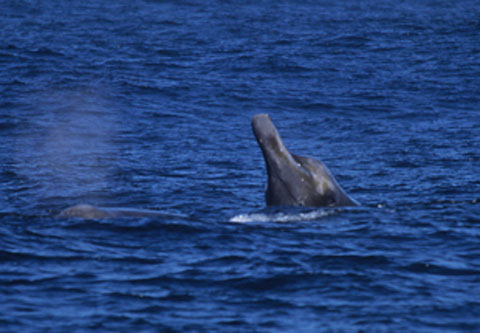 The Minke Whale, Beaked Whale and the Fin Whale are occasionally spotted here in the bay. However, for an occasional Whale Enthusiast chances of a sighting are probably less than 10%.