Saturday 9/12
Whale Watching: Despite foggy conditions, whales were found along the northern edge of the Monterey submarine canyon. We were able to follow 3-4 humpbacks for at least an hour, and we were even treated to a couple of breaches by one whale!

Shark Trip: The fog persisted into the afternoon shark trip, but we were able to spot one shark pretty clearly, with its dorsal fin and tail out of the water!

Sunday 9/13
Whale Watching: We got a break in the air quality, and started the day with good visibility and a glassy calm ocean. We traveled East to the northern edge of the canyon, by way of some other areas that were teaming with bird life. A huge group of sea lions, at least 300, began to gather. Soon after that, 4 humpback whales surfaced right in the middle. 3 other humpbacks joined the group, as we watched for about an hour. The whales surfaced close to the boat, spy hopped, pec slapped, and seemed to be socializing in between feeding dives.

Shark Trip: Water temperatures remain warm in shark territory. We spotted 3 different sharks yesterday, with one swimming slowly next to the boat for several minutes.

Bottlenose dolphins have been active at the Santa Cruz Harbor entrance all weekend! 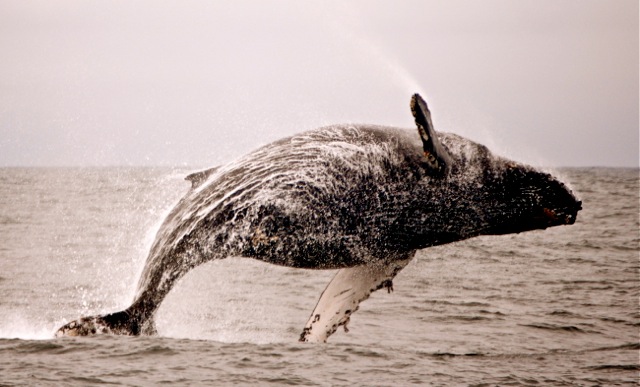